When Is The Best Time To Buy Small Appliances For The Kitchen? 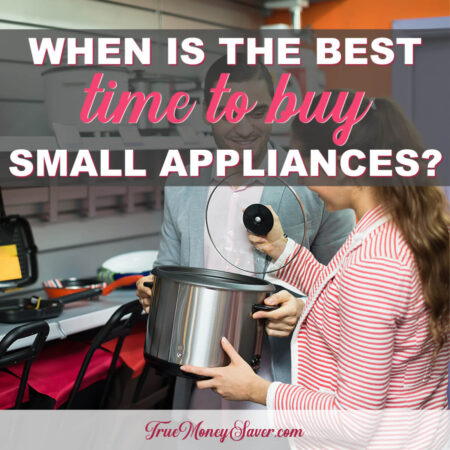 Need to buy some cookware or small appliances for the kitchen?

It’s crazy how those small things can be so helpful, but so expensive too!

And it seems that I have to replace at least one appliance per year!

Oh, and the price of a nice set cookware set? Yikes!

Don’t you feel that you buy several of these small kitchen appliances for gifts throughout the year too? Talk about budget drainers.

That’s why I wanted to share my finds on when to buy cookware sets and small kitchen appliances so that you can save more money this year.

Plus, when you know when to buy small kitchen appliances, you’ll have the knowledge to comparison shop to save even more money.

So armed with the knowledge of when to buy small kitchen appliances cookware set, you can prebuy gifts for the year!

So let’s dig into when to buy small kitchen appliances or cookware sets for your home. 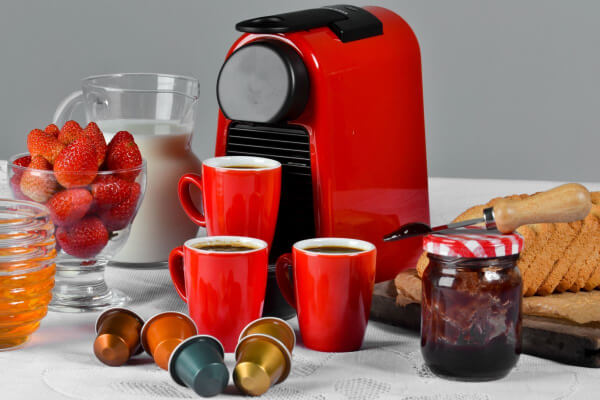 Once you have decided on what cookware or small appliances for the kitchen you need, it’s time to start comparison shopping.

Look at this list of the best small appliances brands from Consumer Reports and read the reviews on them. This can help you narrow down which brand or brands you want to invest your money into.

YES! SEND ME THE GUIDE!
If you are looking into new cookware, check out these tips on how to choose the best set for your kitchen.

Then start monitoring the prices for the item you’ve got your eye on.

Sites like CamelCamelCamel can help you determine how low an appliance has gone and when it was the lowest on Amazon. This can help you learn the price trend it is on.

There are other sites like PriceGrabber, GoggleShopping, and Brad’s Deals can help you research the best price you’ll get to buy small kitchen appliances. 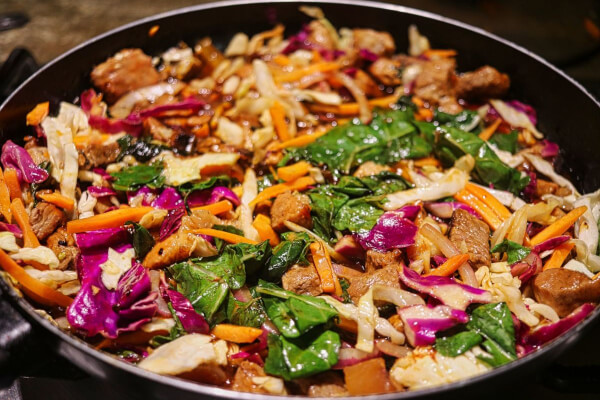 When To Buy Small Kitchen Appliances Or A Cookware Set

But, I’ll bet you’ll be surprised to learn that there are other times of the year where you can snag a deal or two on the small kitchen appliances you might need.

It’s also important to point out that the Black Friday “doorbuster” deals are typically on the lowest level product, such as the coffee maker without the timer… that’s why it’s super important to first decide what you want to buy, THEN you’ll look for when and where to purchase it at the lowest price. See how the strategy works?

During the summer months of May, June, July, August & September, you’ll find deals on:

And this makes sense because these months are when people are moving and students are preparing to go away to college, so the stores are trying to get your business by having sales on them during these months.

In November & December you’ll find deals on these small appliances:

Comparison pricing and timing are only two things you need to know, but the most important is HOW to save when you shop… let’s tackle that now: 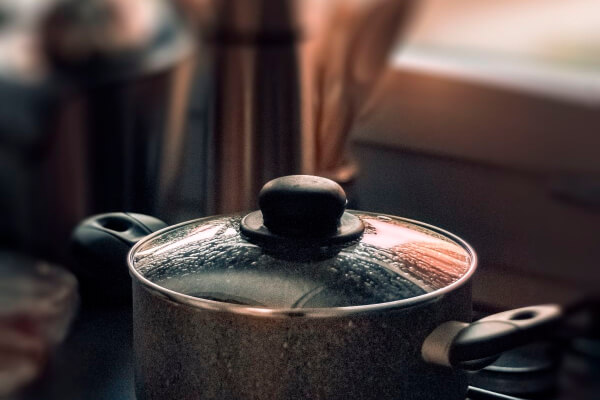 The best small appliance deals can be found at certain stores too. Keep your eyes open for deals at Target, Walmart, Kohl’s, Macy’s, JCPenney’s, Costco, Bed Bath & Beyond, and Amazon.

To get the best deal, at each of these stores you’ll see a sale, plus another promotion, such as a rebate or bonus “store cash” making them the best place to shop for small appliances.

During the holidays, most stores will compete for the sale and they will price match any other store’s price including Amazon.

Check for the stores that are participating in these price matches and know the limitations or rules. Some stores will only price match an Amazon deal that is sold by Amazon and not a 3rd party dealer selling on Amazon.

Costco has some great deals on kitchen appliances all year long. Plus, they have had some great Black Friday prices every year too.

Macy’s usually has some incredible sales on small kitchen appliances. Some as low as $5! Use the free shipping, mail-in rebates, and the low Black Friday prices to score a steal of a deal.

Target has some great sales during the month of September (they specialize in college shoppers). Make sure to stack those sales, Cartwheel coupons, and that RedCard savings to score the lowest deal.

Don’t forget that last year’s model will always be cheaper, so don’t splurge for the new model. 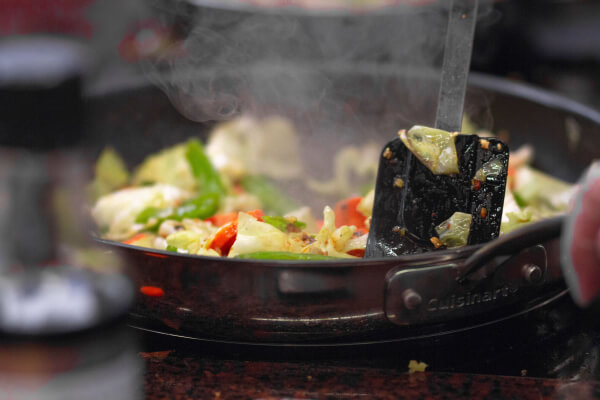 How To Strategically Shop For Small Kitchen Appliances

To get the best deal, at each of these stores you’ll see a sale, plus another promotion, such as a rebate or bonus “store cash” making them the best place to shop for small appliances.

YES! SEND ME THE GUIDE!
Let’s run through a quick example at Kohl’s because it’s the most complicated of them all:

So you can see that the best time to buy a small appliance is when you see a sale with a rebate (you’ll see these two things right on the sales flyer) PLUS when it’s Kohl’s Cash time. And this is probably going to happen during the second half of the year, during May, June, July, August, September, November and December (poor October is left out).

Macy’s and JCPenny’s offer similar promotions with bonus “store cash” as well as rebates so the concept is the same: Buy when it’s on sale, with a promotion (like “store cash”) and check to see if there is a rebate available too.

And don’t forget to always check Bed, Bath & Beyond for their sales, with rebates because they always have a 20% off coupon available (and they accept them even after they’ve expired also with no time limit!). 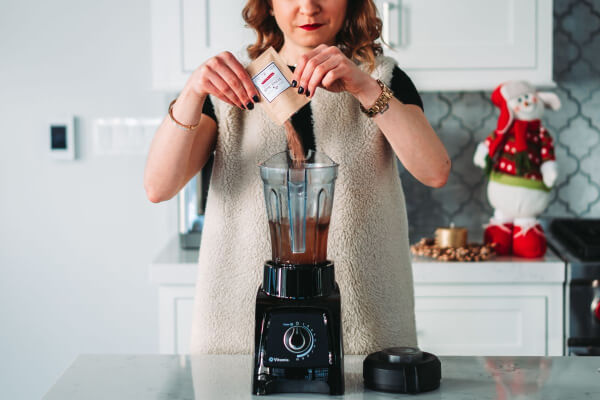 Why The Warranty Isn’t Worth The Money

First, determine the cost of the item. If the item isn’t that expensive in the first place, getting a warranty on the product that costs almost the same price as the item is just silly.

Most manufacturer’s warranties will cover any repair for at least 90 days or more depending on the product and manufacturer. But if the product needs repair before then, you should be able to return the item for a refund or exchange.

Some manufacturers will repair or replace an item within reason. My husband contacted one company about a product he had purchased a year ago, and they replaced it for free with no questions asked. While this isn’t the case for every company, it sure doesn’t hurt to call and ask.

Also, if you buy small appliances for the kitchen with a credit card, your credit card may cover the warranty for up to a year.

Most small appliances usually last 5-9 years. Although I’ve never had a coffee pot last longer than two years. Can you say we drink a lot of coffee? Yes, we do.

Although a simple coffee pot protection plan for 2 years might only cost you $10 on a $100 item, is it really worth it? And can we afford to “protect” everything in our life? Those are the decisions that you have to make for your investment.

So I hope that you’ve learned from my finds on when to buy cookware sets and small kitchen appliances so that you can save more money this year.

Plus, when you know when to buy small kitchen appliances, you’ll have the knowledge to comparison shop to save even more money.

And, armed with the knowledge of when to buy small kitchen appliances cookware set, you can prebuy gifts for the year!

So let’s get saving money!

YOUR TURN: What small appliances for the kitchen do you have to buy this year? Let me know in the comments below! 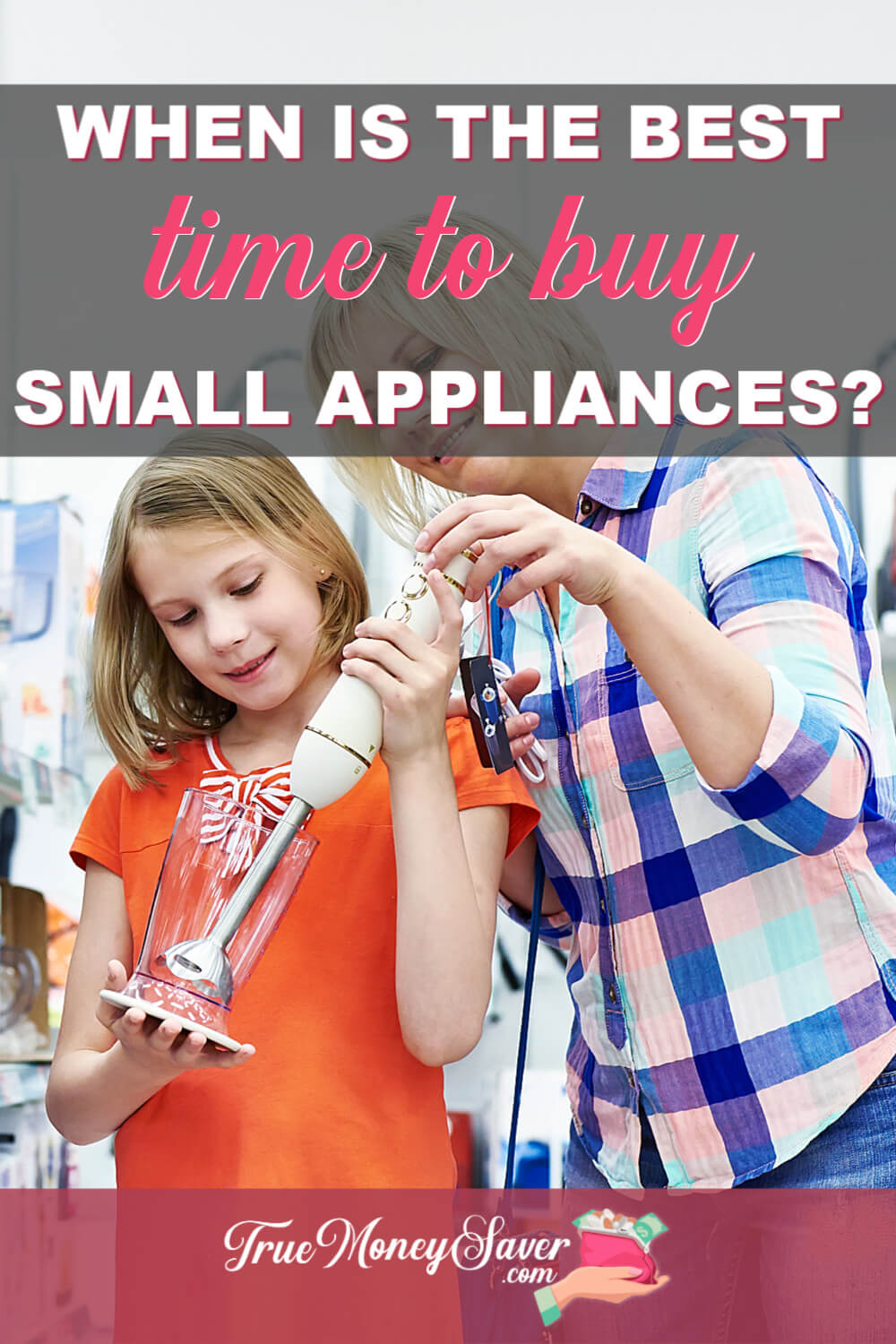 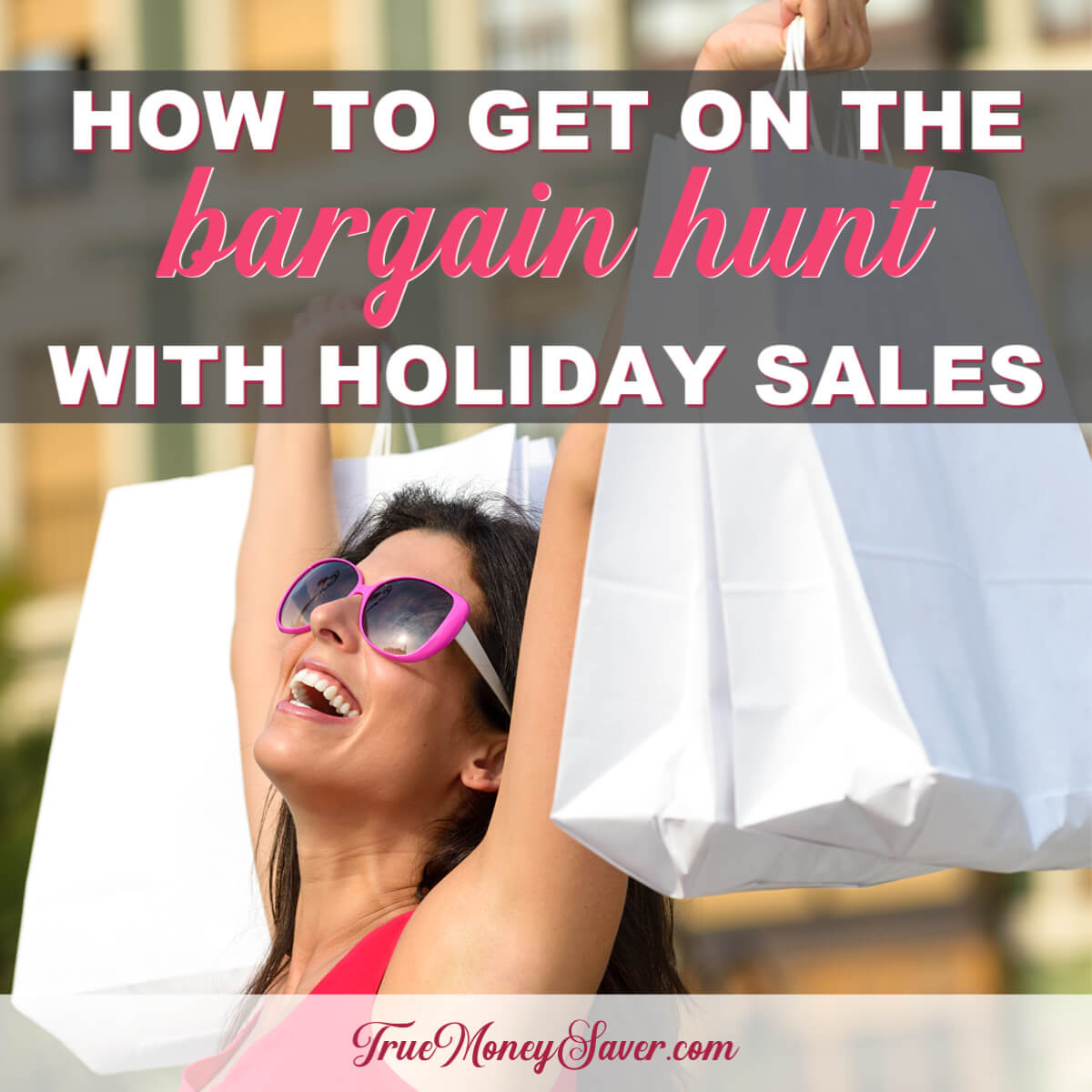 How To Get On The Bargain Hunt With Holiday Sales 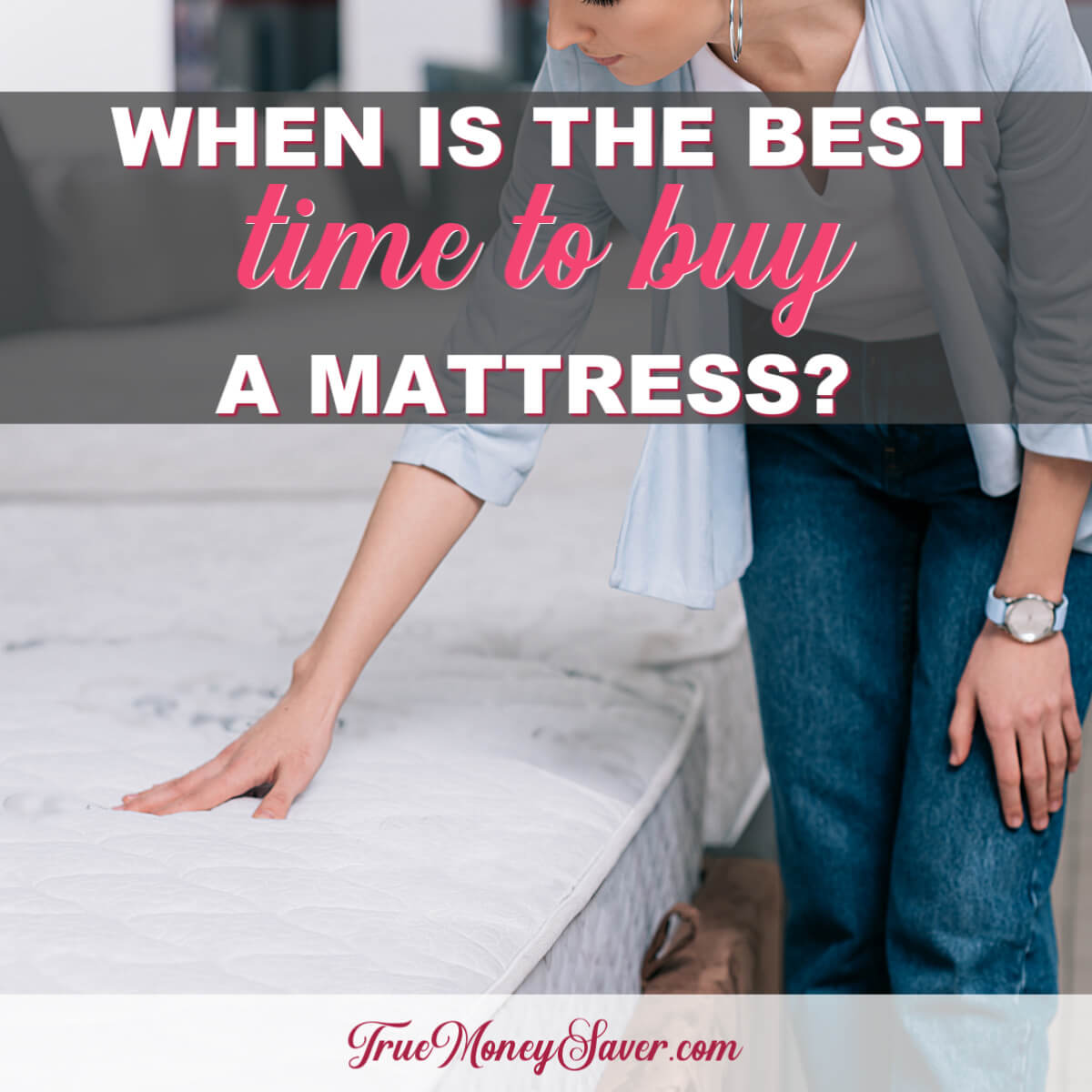 When Is The Best Time To Buy A Mattress? 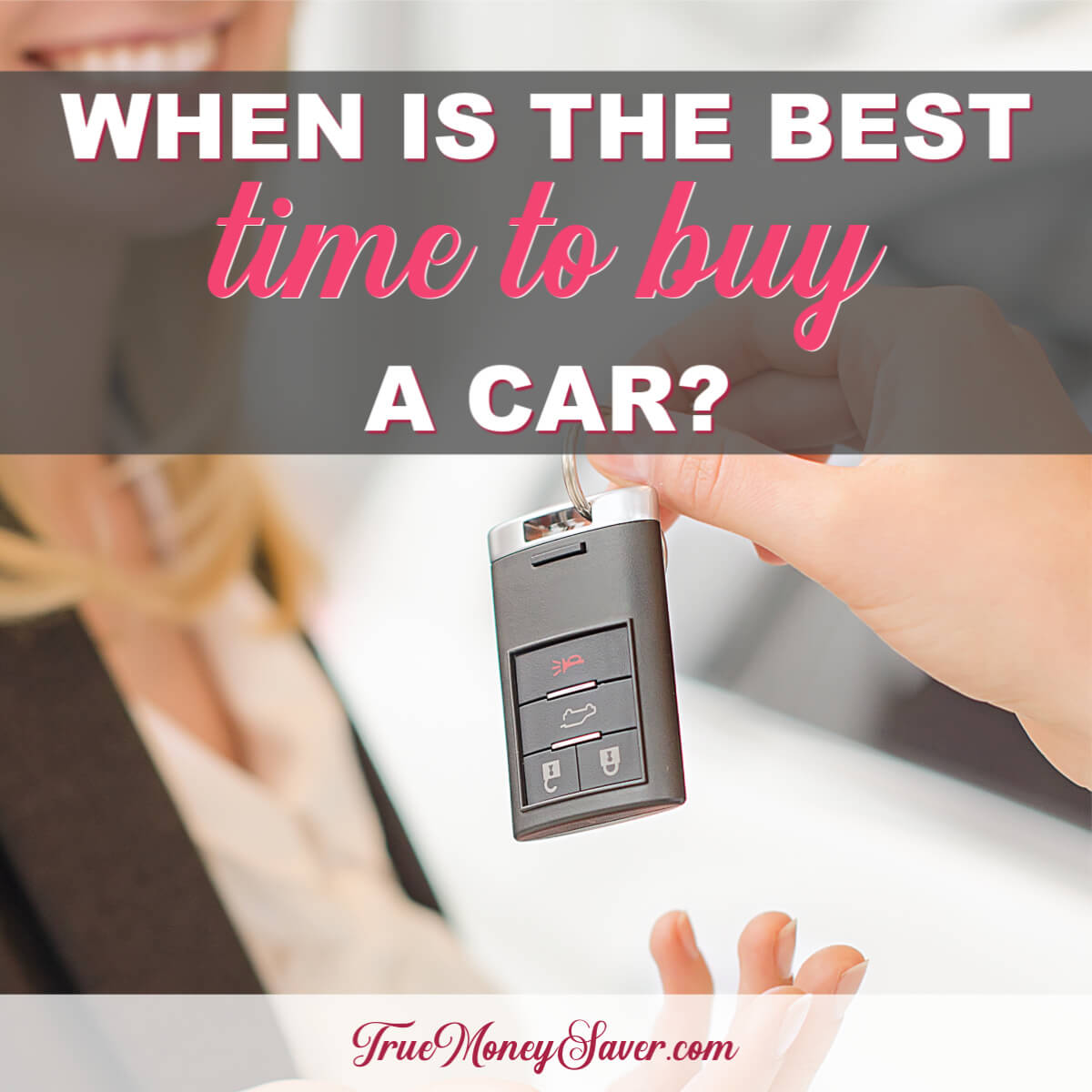 When Is The Best Time To Buy A Car? 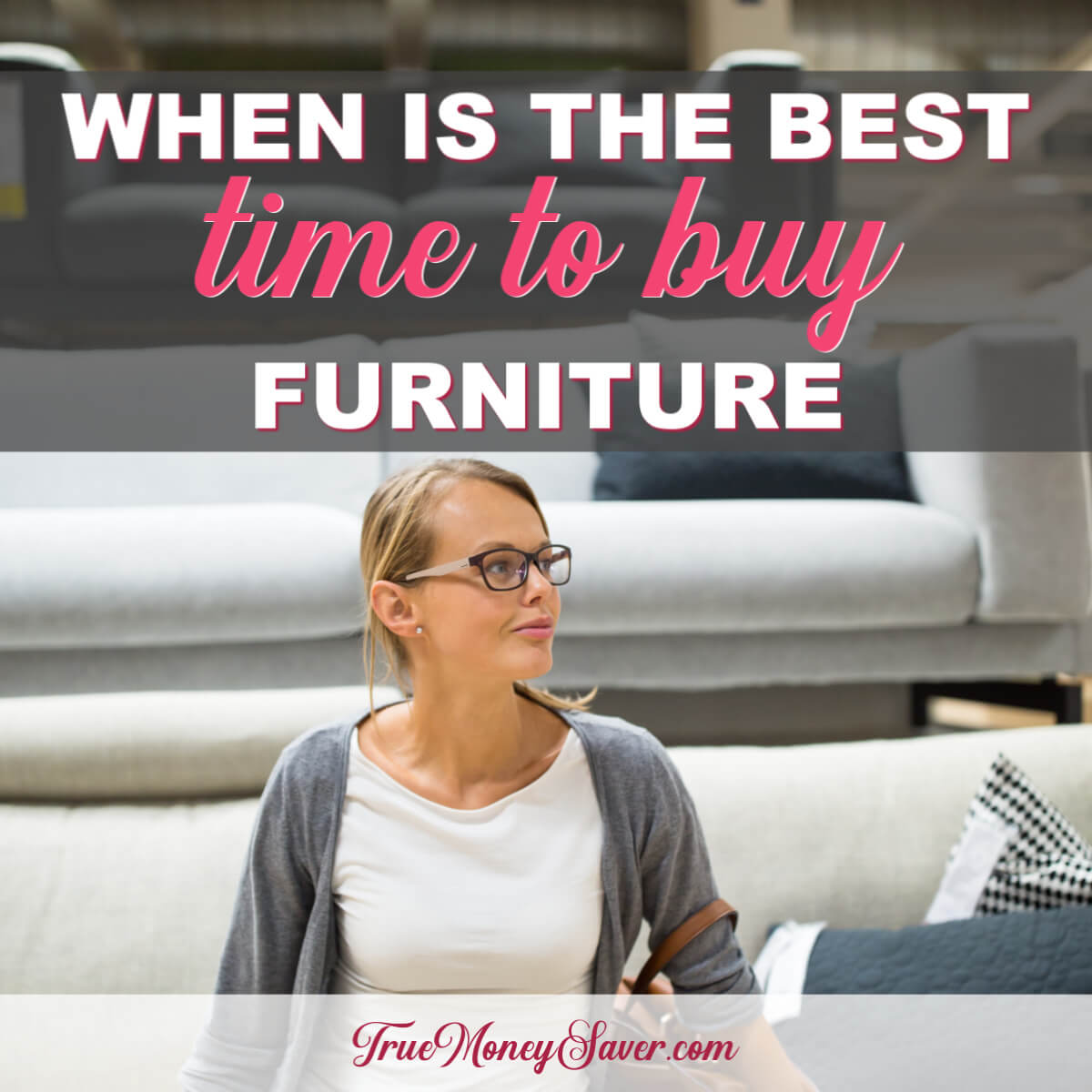 When Is The Best Time To Buy Furniture This Year? 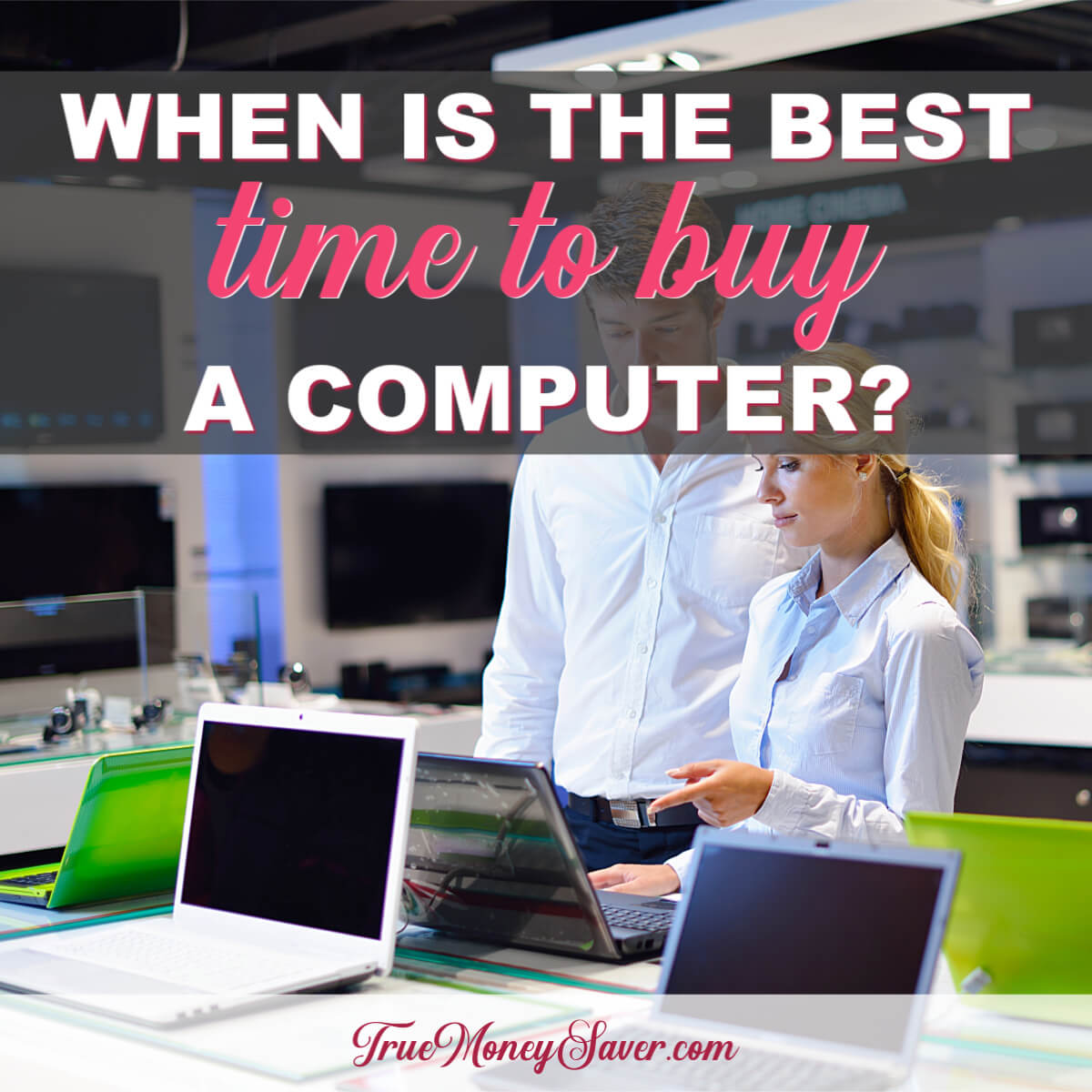 When Is The Best Time To Buy A Computer? 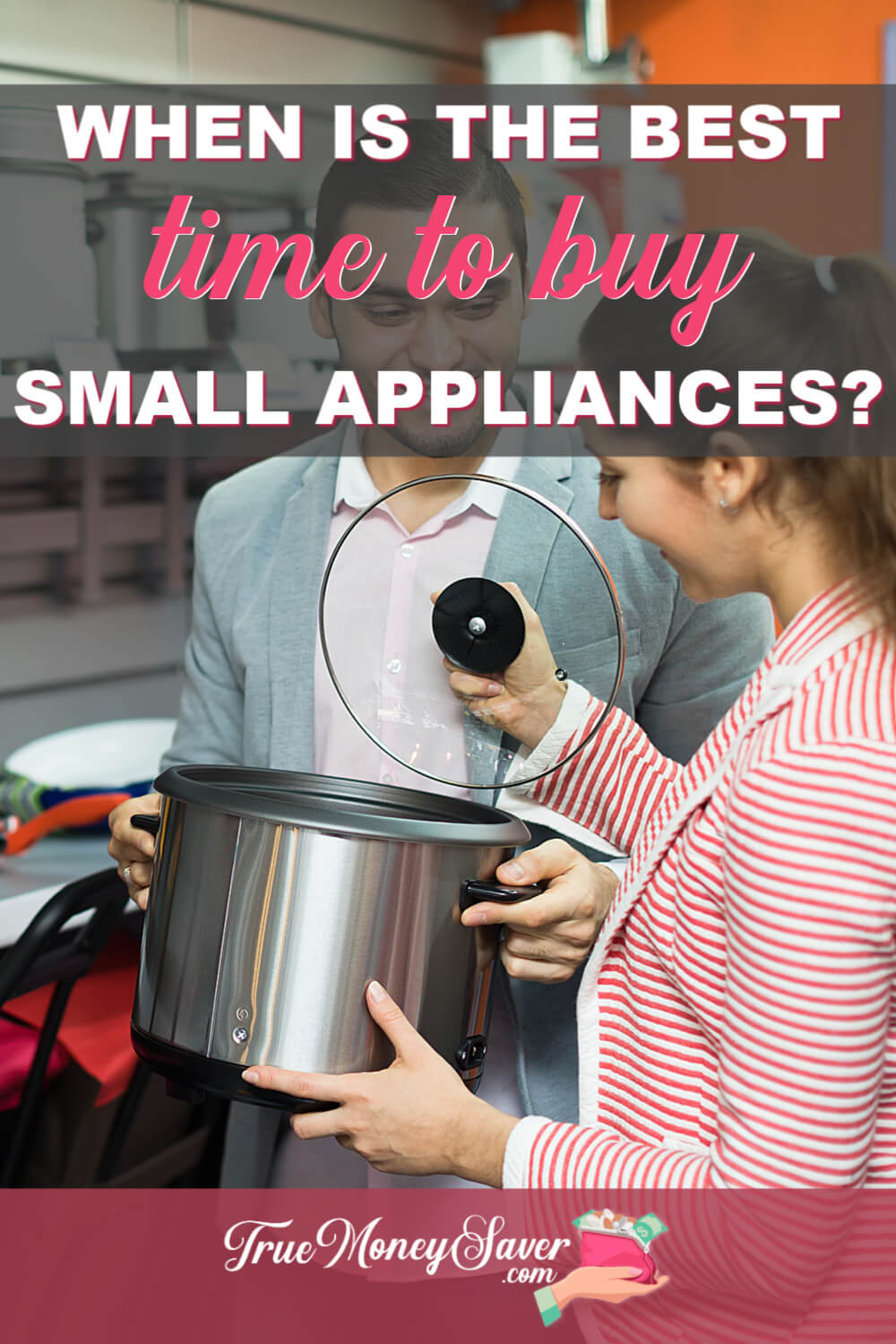 WELCOME TO TRUE MONEY SAVER
On this website you’ll find practical ways to maximize your money while still living life to the fullest. Because I believe everyone has the power to live a life of abundance regardless of their income level.
133 Shares
Share126
Pin7