NINE (9!) Super Easy Ways To Save Money At Starbucks 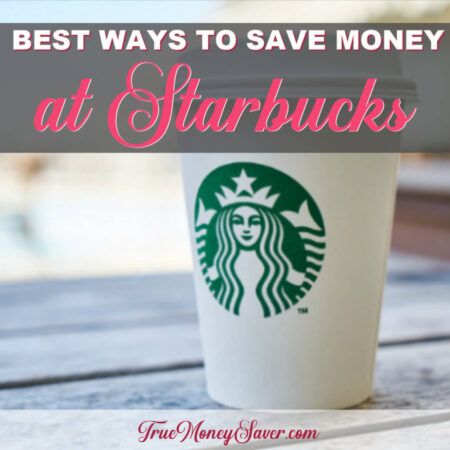 Would you pay $54.75 for a drink on the Starbucks menu? Of course not! (just in case you didn’t think that was a real thing… it is.

A Texas guy paid a record -setting $54.75 for a single drink ordered directly off his local Starbucks menu.

Since I’d venture to guess that you want to save money at your favorite coffee house, instead of wasting it, I’ve got several surprise ways for you to save at Starbucks!

Because caffeine is important and so is saving money at Starbucks.

Plus, Ill show you how to save money at Starbucks so you don’t wreck your budget!

So let’s get down to saving money on the Starbucks menu and getting our caffeine too! 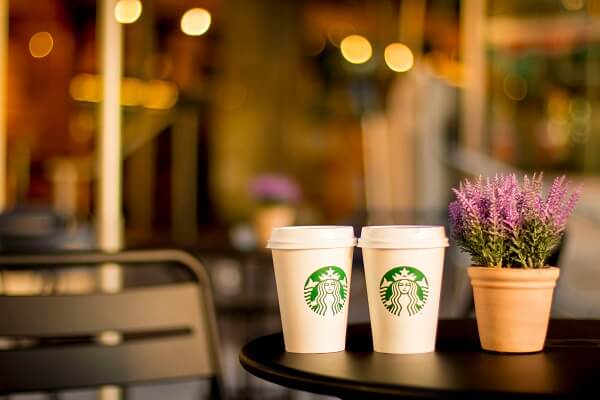 Another reason you definitely want to join their rewards program (did I mention it is FREE to join?) is because, in addition to earning rewards, you get FREE coffee or tea refills on the same visit. AND you can switch it up and change to an iced tea or coffee or back and forth so long as you are on the same visit.

I have spent an hour working at Starbucks before to utilize their wifi and right before I leave, I get a free refill to go!

YES! SEND ME THE GUIDE!
If you are not a Rewards Member, then refills on the drip coffee and iced tea are only $0.50 (hot tea refills are free!). The “same visit” rule applies here.

Regardless if you are a member or not, you can switch things up and get a refill of coffee, even if you ordered tea (and vice versa).

That’s a great tip for saving money at Starbucks! 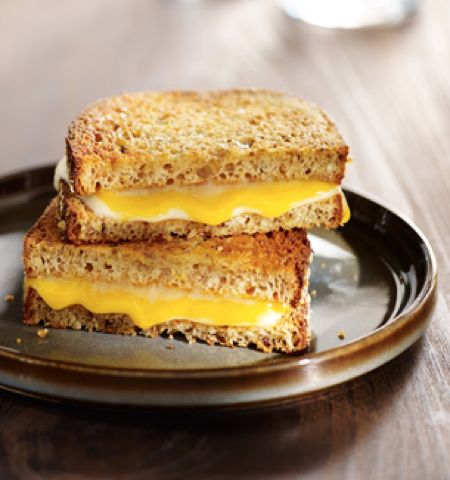 2. Use Rewards Towards Highest Priced Item

In addition to receiving a FREE item for your Birthday (and pay attention, that reward expires one day after your birthday), make sure to use your Star Rewards on something of higher value.

Do not let me hear that you used it on a tall coffee (that’s one of the least expensive items on the menu)!

Instead, splurge, and get something expensive like a $4 grilled cheese and enjoy that for FREE! It’s one of my favorite things on the Starbucks menu!

These Starbucks hacks for saving money are brought to you from years of trying to stay caffeinated as a mommy to four busy kids. 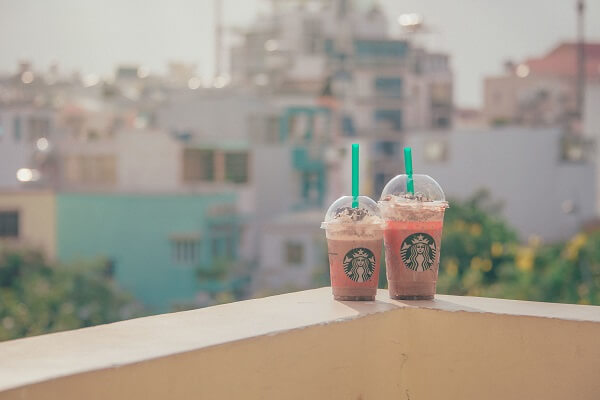 In the mood for a new flavor? Don’t bust your budget with a “thick syrup” that costs extra such as Mocha or White Mocha.

Instead when you get a drink that is already served sweet, ask to substitute the “classic” syrup with another clear syrup such as raspberry, hazelnut, caramel or the more common vanilla. Those don’t cost anything, unlike the other syrups that cost around 40¢ each flavor.

I love saving money at Starbucks with this hack! 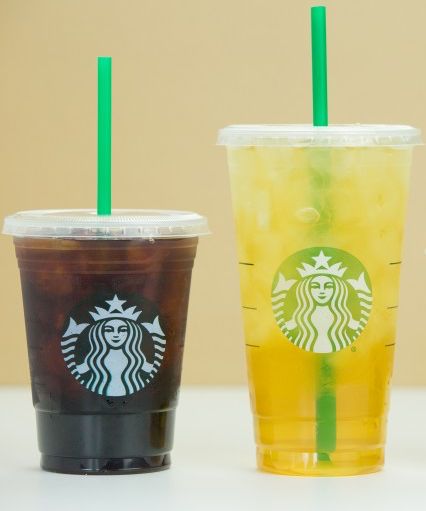 Starbucks is notorious for customizing your drink.

Want an Iced Grande Skinny Caramel Latte? You got it.

No matter what you order, if you get an iced drink, make sure you always asked for “light ice.”

There is no reason to significantly water down your drink or waste all that cup space on frozen water. It can reduce your drink by as much as 50%!

By asking for “light ice” you will get more of your actual beverage versus paying for a watered down drink.

Yes, this is one of the best Starbucks hacks for saving money because you can get extra drink without paying extra for it!

Water is key for a good cup of coffee and Starbucks triple-filters their water.

So rather than pay close to $4 for a bottle of water, ask for a Venti Ice Water and get it for FREE!

NOTE: I would never ask for this item alone. I only get this when I am ordering other items.

This is how to save money at Starbucks without really even trying!

6. Use a Discounted Gift Card

For this savings idea, I actually have three options you can utilize for saving money at Starbucks:

1. Similar to what I suggest with using gas gift cards in order to never pay that inflated “credit price” at the gas station, you should never pay full price at Starbucks when there are so many ways to get discounted gift cards first. Once you get a gift card, you can connect it (or load it) on to your Rewards Card.

YES! SEND ME THE GUIDE!
2. You know those Grocery Apps we are always talking about such as Ibotta?! You can convert your rebate balance into a Starbucks Gift Card. That’s free money!

3. Groupon also offers Starbucks Gift Card Deals about every couple of months. And they can save you up to 50% Off! We’ve seen offers to get a $10 gift card for only $5, or get a $15 gift card for $10. Those are huge discounts! Check here to see if there is a current promotion going on! 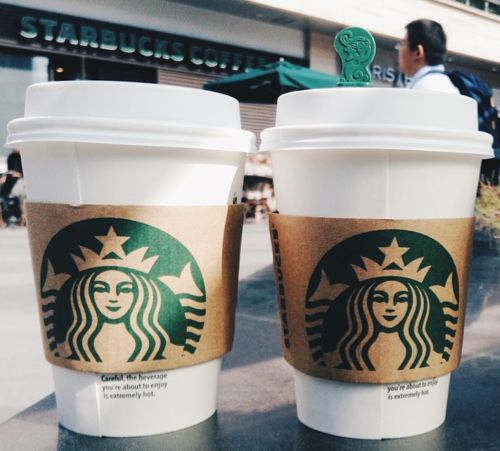 If you’re meeting up with a friend, you will definitely want to ask to share!

An Iced Venti beverage is 24 ounces and costs $2.95, while a Tall is 12 ounces and costs $1.95, that means you will save a buck by splitting a large instead of getting two Talls! You can even do this with other drjnks or food items on the Starbucks menu. 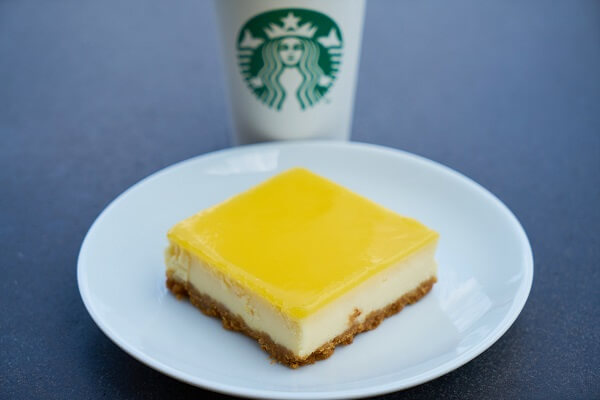 Watch the bottom of your receipt!

About every other month, Starbucks offers a promotion called the “Sweet Receipt”. When you purchase a drink in the morning, you can bring back that receipt after 2 p.m. and purchase any bakery item for only $1.

Now that’s some great Starbucks hacks for saving money on those sweet treats!

Note: This is not a “company wide” perk that is owed to the customer.. so I don’t want anyone going to their store and giving them any “sass” if they don’t do it…

If you have your puppy with you either in the Drive-Thru or In-Store, you can ask if they carry a Puppaccino (essentially a Frappaccino for dogs) and they will give you a “short” size cup filled with whip cream. YUM! (and no, you will not earn any stars for it… because it is a FREEbie!)

So as you can see, I believe caffeine is important and so is saving money at Starbucks.

I hope you learned how to save money at Starbucks so you don’t wreck your budget!

Your Turn: What extra ways have you found to save money on the Starbucks menu? Share them by Commenting below! 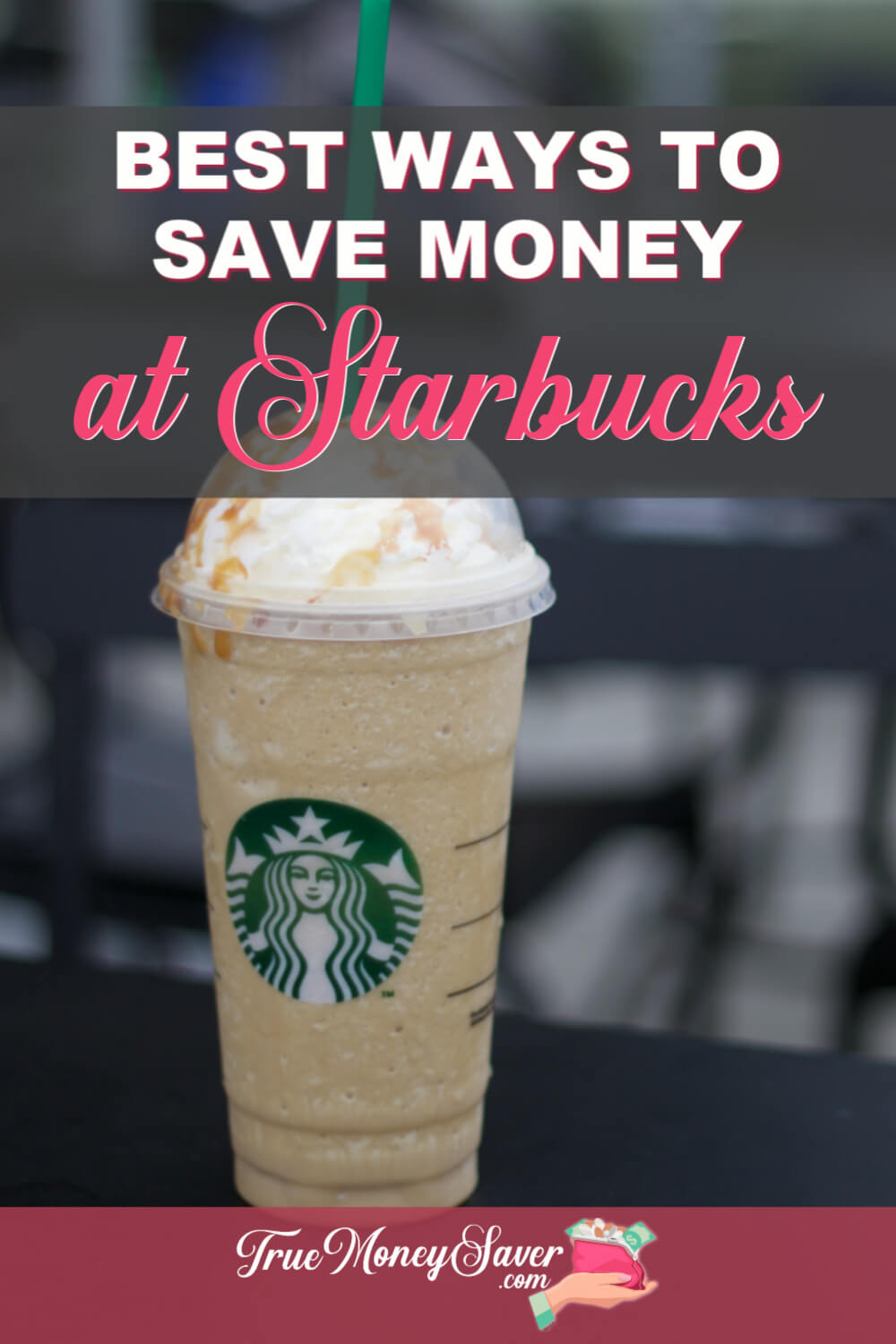 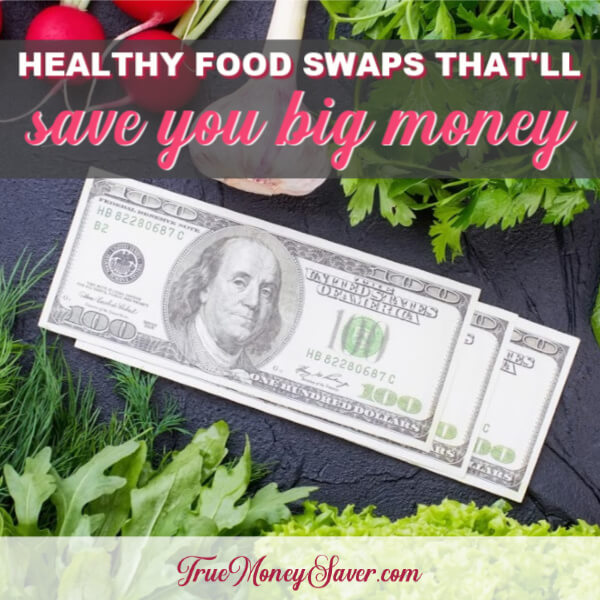 I’ll show you the several ways you can narrow down healthy deals that will also save you money! 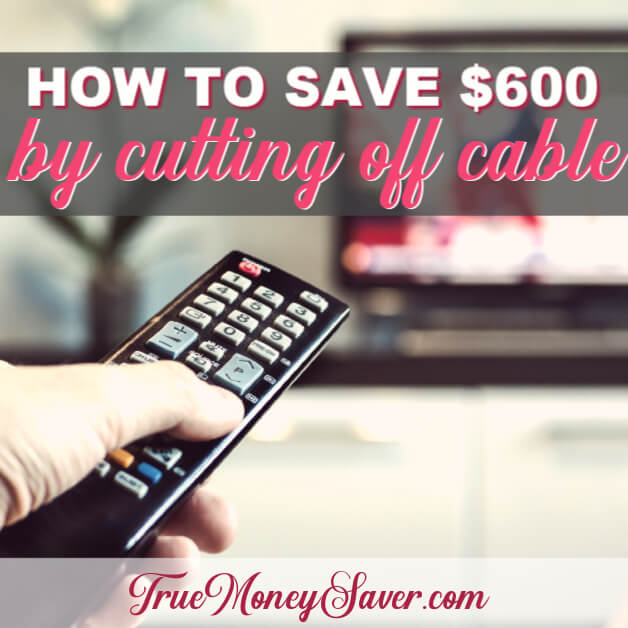 You can save BIG money by CUTTING OFF your cable!! 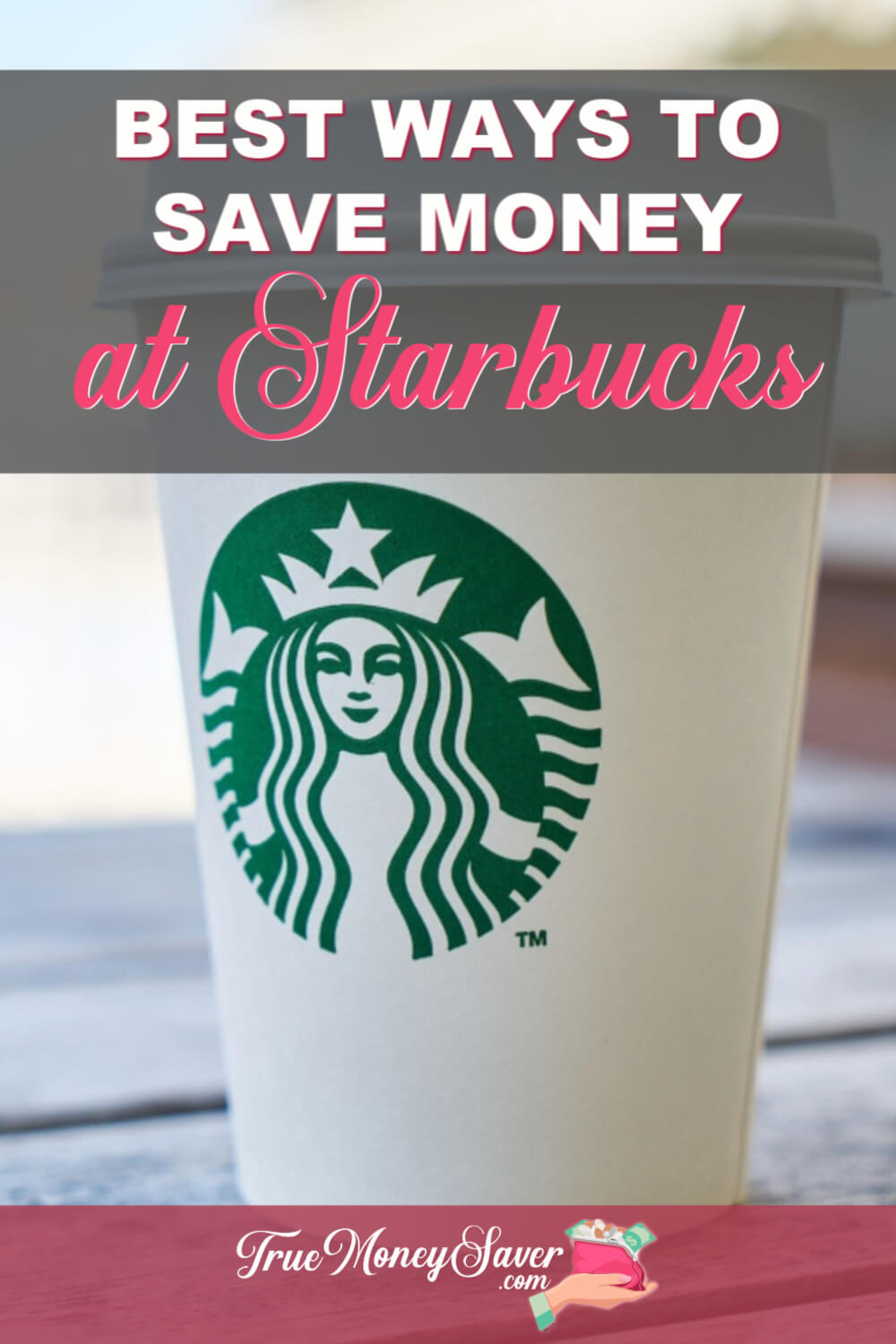 WELCOME TO TRUE MONEY SAVER
On this website you’ll find practical ways to maximize your money while still living life to the fullest. Because I believe everyone has the power to live a life of abundance regardless of their income level.
279 Shares
Share243
Pin36
12345