“Who was Jesse Owens” Book just $5.99! Ships FREE with Prime 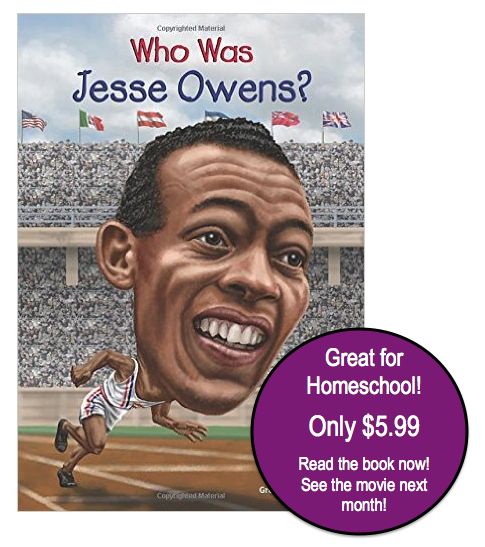 Shipping is FREE with Amazon Prime

“Who was Jesse Owens” Book Details:

At the 1936 Berlin Summer Olympics, track and field star Jesse Owens ran himself straight into international glory by winning four gold medals. But the life of Jesse Owens is much more than a sports story. Born in rural Alabama under the oppressive Jim Crow laws, Owens’s family suffered many hardships. As a boy he worked several jobs like delivering groceries and working in a shoe repair shop to make ends meet. But Owens defied the odds to become a sensational student athlete, eventually running track for Ohio State. He was chosen to compete in the Summer Olympics in Nazi Germany where Adolf Hitler was promoting the idea of “Aryan superiority.” Owens’s winning streak at the games humiliated Hitler and crushed the myth of racial supremacy once and for all.

Ships FREE with Amazon Prime or any order of $35 or more.

If you’re an Amazon Prime Member many items on Amazon.com will ship FREE!
An Amazon Prime Membership also gets you unlimited FREE  instant streaming of movies and TV shows! Not a Prime Member?  You can sign up for a FREE 30 day trial of Amazon Prime and get shipping FREE on any item marked with the “Prime” symbol (which are a TON of them).

Please note that Amazon’s prices fluctuate and can change at any time.  Be sure to verify current price before placing your order.  Find more great Amazon.com Deals on TrueCouponing.com!

WELCOME TO TRUE MONEY SAVER
On this website you’ll find practical ways to maximize your money while still living life to the fullest. Because I believe everyone has the power to live a life of abundance regardless of their income level.
7 Shares
Share
Pin7